Save your back, and demolish flooring surfaces 6 times faster with the Jackhammer trolley. For ceramic tile removal in large areas, nothing comes close to the speed and efficiency you get using a jackhammer supported in the Makinex jackhammer trolley.

No more struggling or bending trying to handle heavy jackhammers! The Makinex Tile Stripper is here!

The Makinex Jackhammer Trolley, previously known as the Easy Hammer, is an innovative demolition tool for the fast and easy removal of floor tiles, vinyl and cork from concrete and wooden surfaces. It can also be used to remove residue from tile beds and for breaking rocks, blocks, concrete and sandstone.

The Makinex Jackhammer Trolley quickly removes floor tiles with some customers claiming they can do their demolition job up to 6 times faster than when using a jackhammer alone.

The Makinex Jackhammer Trolley carries most of the weight of the jackhammer while the user positions themselves behind the trolley and pushes it along. The ergonomic design minimises vibration impact on the user and provides safer jackhammer operation by reducing back strain and operator fatigue.

The Makinex tile stripper can be adjusted to 6 different positions, ranging from 20-80 degrees to suit most demolition jobs, making using a jackhammer and your demolition job easier, faster and safer.

*Jackhammer and attachments are not included and are sold separately.

There are no reviews yet.

When you purchase any MQ approved used equipment, you have the reassurance of knowing that all the equipment has to meet our meticulous standards before they are offered for resale. All elements of the refurbishment are carried out with original spare parts and in the unlikely event that you will have an issue within the first 30 days, we offer a full warranty guarantee during this initial period. 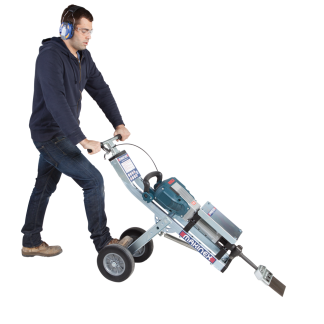